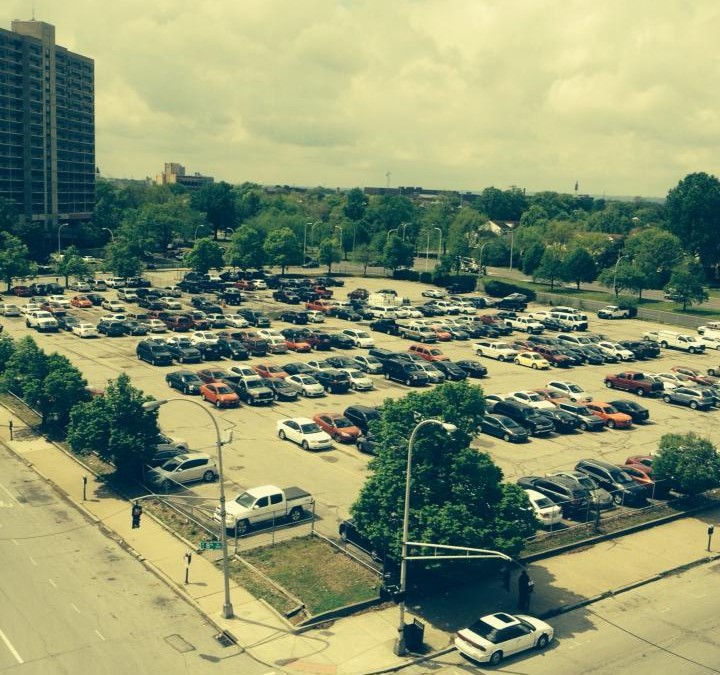 The image is of one of the largest city-owned lots. It occupies the entire block between Jefferson and Liberty, 8th and 9th Streets. The lot helps isolate the west end from the rest of the city.

Louisville won the distinction of being the nation’s city with the worst infestation of surface parking lots, http://brokensidewalk.com/2016/parking-crater/ ….so we began a campaign asking the city to re-purpose, re-develop city-owned surface parking lots. Four images taken from the top level of a  garage on Jefferson, between 7th and 8th, can be seen on De-Surfaced facebook page.  https://www.facebook.com/groups/1544867725731584/  .  The images are of:

#1 – one of the largest city owned lots, located between 8th and 9th, Jefferson and Liberty, city employee lot, not public

#2 – image taken from same location of image #1, after turning around

#3 – another of the largest city owned lots, located behind City Hall, between 6th and 7th, Market and Congress Alley, also city employee lot, not public

#4 – image taken from same location of image #3, after turning around

Images #2 and #4 illustrate opportunity for usages of greater value than parking cars on top levels of a garage.

Plans for media release and event are taking shape.  Fnal touches to a video of kids answering questions regarding surface parking lots are in process. An online petition  is complete, to be launched simultaneously with the video. Conversations paving the way for positive collaboration with PARC and mayor’s office have begun.  The list of Supportive Partners includes: 350 Louisville, Bicycling for Louisville (B4L), Bike Couriers Bike Shops, Center for Sustainable Urban Neighborhoods – University of Louisville, Coalition for the Advancement of Regional Transportation (CART), Louisville Grows, Neighborhood Planning and Preservation, and New Roots. Metro Council members have been requested to support the campaign. Contacts with local urban redevelopers as Supportive Partners in the campaign have begun. The list of Supportive Candidates includes: Attica Scott – State Representative, Bryan Burns – Metro Council District 4, Chris Kolb –  Metro Council District 8, Lynnie Meyer –  Metro Council District 8. Recruitment of Supporters in all categories continues.